Lovelace Gas Service, Inc. has been serving the Central Florida community since 1958. As a family owned and operated company, we enjoy providing propane gas solutions and services for our residential and commercial accounts. In addition, we have onsite backup generators and a private radio system to provide continuing operations during community emergencies. 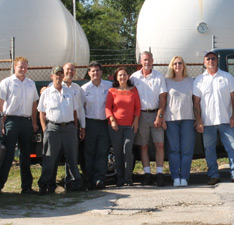 When Muril and Florence Lovelace moved to Orlando from Duggar, Indiana, Highway 50 was a gravel paved road. Muril worked as a butcher and Florence as a cashier for Winn-Dixie down-town. In the late 1950's, they began selling mobile homes on the side and eventually started selling propane to the growing population in Central Florida. Their son, Bill, operated a machine shop in the early 1960's on the same property building components for the aerospace industry. As the Central Florida population continued to grow through the 1960's, Bill joined up with his parents and as a family they focused their efforts to expanding the propane business.

Bill's growing family, including his sons, son-in-law and the fourth generation all enjoy continuing the family tradition of servicing the Central Florida community with propane energy solutions.